We are part of a worldwide family of centres dedicated to training, researching, promoting and preserving traditional wushu in the comprehensive system of Chang Hong WuShu, founded by Master Chen Ching-Ho and handed down to Masters such as SiGung Marco Kavelieratos. Our traditional classes include Kung Fu (Chang Chuan and Hong Chuan) and Tai Chi (Yang Style), both of which include QiGong and Meditation practice. 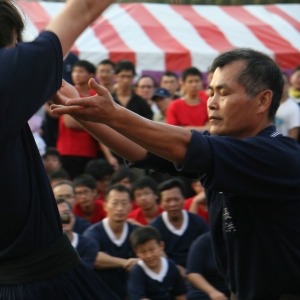 Master Chen Ching-Ho was born in Chang-Hwa County of Taiwan in 1960. He graduated from Chinese Culture University in Taipei with a major in Chinese Literature. He has practised Chinese Wu Shu for almost 40 years since his early childhood. He has dabbled in the study of Tai-Zu Quan, White Crane, Cai-Li-Fo, and various other styles of kung fu for some time. But the core of his teaching now is in the styles of Long Fist, Hong Quan and Tai Chi.

He was once the Chief Instructor of the Training centres of Taipei Association of Chinese Wu Shu from 1986-1994. He is currently teaching at the Wu Shu Clubs of National Taiwan University, National Central University, Chinese Culture University, Formosa Hospital and various other organizations, in addition to teaching at his own school.

He has revolutionized the mode and direction of tournaments and contributed significantly to developments of Wu Shu. He also authored many books on Wu Shu, and started Chang Hong Wu Shu Yearbook (now in its 12th year) to promulgate Wu Shu culture and traditions. He is the founder of Chinese Academy of Chang Quan and Hong Quan and had been the Chairman of the Steering Committee for the first and second terms.

Currently Master Chen is the founder and Chief Instructor of Institute for the Advanced Study of Chang Hong Wu Shu. He has taught over several thousand students, spread out all over Asia, Europe, Americas, Africa and other continents.

There are several dozens of training centres for the Academy all over the island and overseas. They are all highly regarded in the martial arts community. Master Chen has often been invited to various companies, areas, schools and organizations to give speeches and seminars. He has several times travelled as far as to Johannesburg and Cape Town, South Africa to give seminars and teach Wu Shu to local communities. 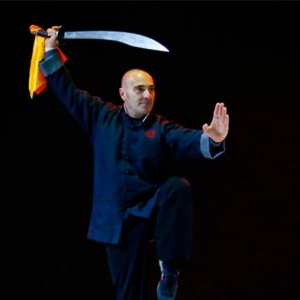 Si Fu Marco has been training martial arts most of his life. At age 9 he was introduced to Japanese arts and practiced karate for several years. He then moved into learning Chinese martial arts at the age of 13. His enthusiasm and dedication in kung fu led him to open his own school at the tender age of 19. He started instructing at the local gym and within six months moved into his own premises.

Since then the centre grew and so did the students whose lives were enriched into a new era of Chinese martial arts. In the pursuit of expanding his unquenchable thirst in the arts Si Fu Marco decided to expand his horizons and seek other styles and schools internationally and he set off to Europe in 1987. His travels took him to the United States in 1988 where he built new relationships with many masters. He then set about the task of liaising with practitioners, masters and competitors with the purpose of promoting South African Chinese martial arts. In 1989 Si Fu Marco achieved the highest accolade in sport, his South African colours.

He competed successfully internationally. With all the experiences in his travels and competition he decided that competition would not be the main focus of the school but the teaching of authentic traditional Chinese martial arts. The following year 1990, he coached the South African team for international competition in the USA. The team member performed well and brought home several trophies. He continued to become more competent in his knowledge and became and certified judge and referee.

In 1994 a team selected by Si Fu Marco representing Chinese Martial Arts & Health Centre attended an international competition in Beijing, China. It was a dream come true for many of the team members to visit the country where kung fu originated. Their performance was outstanding bringing many medals home. In 1999 another team selected by Si Fu Marco again representing Chinese Martial Arts & Health Centre trained diligently in preparation for an international competition in Baltimore, USA. The students participated in the traditional bare hand, weapon, semi contact and full contact divisions. Several gold, silver and bronze medals were attained. The students were delighted to participate in competition but felt that the true benefit was in the training preparation and the camaraderie of the team.

Since 1999 Si Fu Marco has moved his focus away from competition and has travelled extensively to Taiwan to continue his training with Master Chen. More recently he has set up Martial arts seminars and focused on technical and cultural exchanges with his and Master Chen senior students. This has helped strengthen the students’ martial arts understanding and helped foster relations between South Africa and China.

Celebrating our twentieth anniversary during 2005 was the highlight for that year. During the following years Si fu Marco has managed to bring four of his most senior students to Si fu level. Si Fu Marco spends most of his time traveling and teaching the senior levels of all the schools. He is currently translating Master Chen’s books into English for the benefit of all our English speaking students around the world. 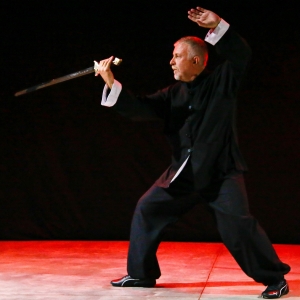 SiFu Christian is the head of Tai Chi for the Chinese Martial Arts and Health Centres worldwide. SiFu Christian began his Martial Arts training in 1985, at a branch of a school known as “The Shaolin Martial Arts Centre” and remained there off and on for about 3 years. In 1989 he joined the Cape Town branch of the then “The British Taijiquan and Shaolin Wushu Association” that later became known as “The International Taijiquan and Shaolin Wushu Association” or I.T.S.W.A.

The styles of Martial Arts taught by the Association are Wing Chun, 7 Star Mantis Kung Fu and Yang Style Taijiquan. From 1989 to Dec 2002 he trained in all 3 systems. In 2004 he dropped the Kung Fu and focused exclusively on Taijiquan.

In 1990, his teacher , Sifu L Reed, offered him the opportunity to do instructors training with a view to him teaching at a future time. This involved private lessons as well as extra training above and beyond the normal training times and classes.

SiFu Christian qualified as a junior instructor in 1995, and assisted his teacher with teaching of new and beginner level students. He held this title and rank and remained under the tutelage of Sifu L Reed until shortly before his passing in 2003. SiFu Christian continues to train under the head of I.T.S.W.A, Sifu Derek Frearson, who travels to South Africa on almost a yearly basis. He received his full instructor (Sifu) title in 2004, and has been teaching professionally ever since. In 1995 he was invited by Sifu Marco Kavalieratos to teach Taijiquan at the Cape Town branch of “The Chinese Martial Arts and Health Centre”. SiFu Christian has since studied under Master Chen and Si Fu Marco adding the Chang Hong Tai chi system to his knowledge base.

In 2007 SiFu Christian was asked to head up Taijiquan for all branches of the Chinese Martial Arts and Health Centre.

READ MORE ABOUT OUR SYSTEMS

At the Chinese Martial Arts and Health Centres worldwide, we teach both Northern Shaolin and Hong Family Fist styles. Collectively these methods are taught concurrently and are referred to as the Chang Hong System as taught by Master Chen Ching Ho of Taipei, Taiwan. Both of these styles have a long history and are well known and practised throughout the world.

This style includes a wide variety of barehand and classical weapons in its training. In this style the postures are open and wide with a lot of emphasis on legwork and kicking. This style has been heavily influenced by the Nanking Central Martial Arts Institute that was founded in 1928 with the purpose of consolidating and promoting traditional styles of Chinese Kung Fu. There are ten barehanded forms, which include various animal forms. The weapons used in Norther Sholin Long Fist are staff, saber (dao), straight sword (jian) and spear and include double (two-man) sets.

This is another Shaolin based style. It is perhaps the most well known style of the five main styles that originated in Southern China. It is famous for its widely varying arm techniques which are expressed in its animal imitation movements. Among its many animal styles, the Hong Quan methods concentrate on Tiger, Crane, Snake, Leopard and Dragon styles. Hong Quan’s weapon forms include the staff, sabre, straight sword and spear and also have many unique weapons such as the kwan dao, pu dao, iron forms (sai), fan and umbrella.

Yang Style is the most popular and widely practiced Tai Chi style world wide. The Chinese Martial Arts and Health Centre teaches a selection of both the modern short Yang Style forms and the traditional long form. Tai Chi is a powerful exercise for improving health and well being, but it is primarily a highly effective martial arts system focusing on sensing and applying the subtle nuances of internal energy flow and power generation. This takes many years to understand and apply, and Tai Chi is often best taught with Kung Fu for the student to gain an effective combat response in a shorter time frame.

For more information about our systems and history, please visit the Chinese Martial Arts and Health Centre’s main website HERE.